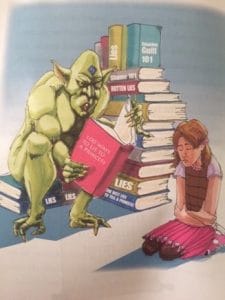 Struggling with feelings of GUILT and SHAME

The Lie Monster Guiltizar’s Lie – “It Was My Fault!”

After sexual abuse, there is a sense that it could have been prevented if only….
I had a huge list of “I should haves.”

I should have….
fought back
worn different clothes
run away
screamed
told sooner
not accepted the gift
hit him
blah blah blah

Accepting that it’s not your fault

For many years, no one could convince me that the abuse was not my fault. Therapists challenged my thinking with all the right sentiments:

You were the child; he was the adult
You were powerless over someone bigger
You were manipulated
He was a predator
He knew how to gain your trust
Children don’t have the ability to defend themselves from a grown-up
Again, blah blah blah

For victims with multiple abusers, it can be even more difficult to believe the blame belongs to the abuser. I look back now and wonder, why was it so hard to believe in my own innocence? Why did I need to accept at least part of the blame? By accepting part of the responsibility, did it help me feel some sense of power to control the situation? No.

Listen to other people’s stories

During the many years in and out of psychiatric hospitals and treatment programs, I participated in many group therapy sessions listening to other survivors share their story. Each one had a list of “I should have…” I often became indignant at my peer’s relentless need to take some ownership in their abuse. I could so clearly see them as a helpless child or teen or even adult. I knew of their innocence deep in my soul, but I could not sway their thinking, just as no one could change mine.

I believe we blame ourselves because we are filled with shame, the very shame that might have begun with the guilt.

People I loved and trusted said:
You know you want me to do this
You know you like it
You know it feels good (NOTE! All bodies get aroused when stimulated. It’s natural.)
You flirted with me
You’re so sexy; I can’t help myself

I was conditioned to perform
I was manipulated to participate

The vicious cycle of lies floating around in my mind went something like this:
It felt good – I must want him to do this – I turned him on – I’m bad – It’s my fault
There were millions of similar thoughts running through my mind over the years.

The key was to tell my story over and over again!
Every time I shared:
The poisonous lies I believed became exposed
The truth overtook my faulty thinking
The shame decreased and the joy increased
My sense of innocence grew as others accepted me

As long as I kept the secrets of my abuse, I never believed anyone could love me. When someone said, “I love you,” my first thought was, If you knew _________ about me, you wouldn’t love me. When I began to force myself to share my pain and memories, I discovered something amazing.

People responded with love and respect.

I’ve now defeated Guiltizar and I know “None of it was my fault!”